No Result
View All Result
*Affiliate Disclosure: I may be compensated if you purchase through affiliate links on this site. As an Amazon Associate, I earn from qualifying purchases.

Staying cool and comfortable at home is a top priority.

Sometimes a standard cooling fan won’t cut it and then you need one of these best ceiling fans, instead.

They’re powerful enough to ensure you stay cool tucked up in bed or working at a desk or lounging on the couch.

We like to ensure that the air they circulate is pure and healthy too and combine ours with an air purifier.

But that’s a matter of personal taste, so for now, check out these awesome ceiling fans.

A very quiet acting fan which can really cool down any room that it’s installed in too.

It’s gorgeous, though the price tag is a little steep and it does a great job in large rooms.

If you want lights and action with your fan, this Honeywell model has serious style.

HUNTER is a big name in the ceiling fan market and the Hunter 53091 Builder Deluxe shows that they’ve earned their reputation by its high quality build.

We like the fact that it offers three different speeds and has a 5102 CFM rated airflow.

The two light fitting is a nice extra which allows you to add a little more light to a room. 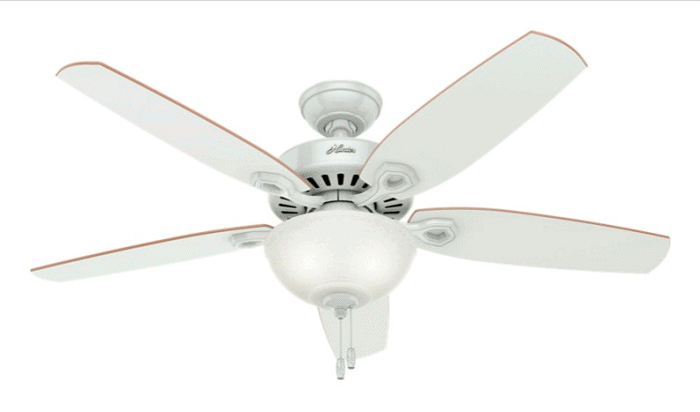 Quick Fact: This fan uses a WhisperWind motor which is unique to HUNTER products and it makes it super quiet when in use – that’s a real plus when you want to work or sleep.

1. It’s very reasonably priced – we don’t think there’s a need to end up broke for some cooling power
2. It’s very quiet, in fact, the quietest fan that we tested
3. It’s more than powerful enough to cool large rooms

1. The supplied lighting could be a little stronger, it’s a bit dim
2. Can auto power off if the bulbs overheat
3. Can be a bit of a challenge to install if you’ve not done this before

Sometimes, you don’t just want a fan to keep things cool – you want it to impress visitors to your home too and then you buy the Minka-Aire F844-DK fan.

This fan is super stylish with a body and blades which mimic Koa wood and unless you get next to it, you can’t tell the difference.

The air flow rating is 4541 CFM which is a bet less than the HUNTER model in our pole position in this list. 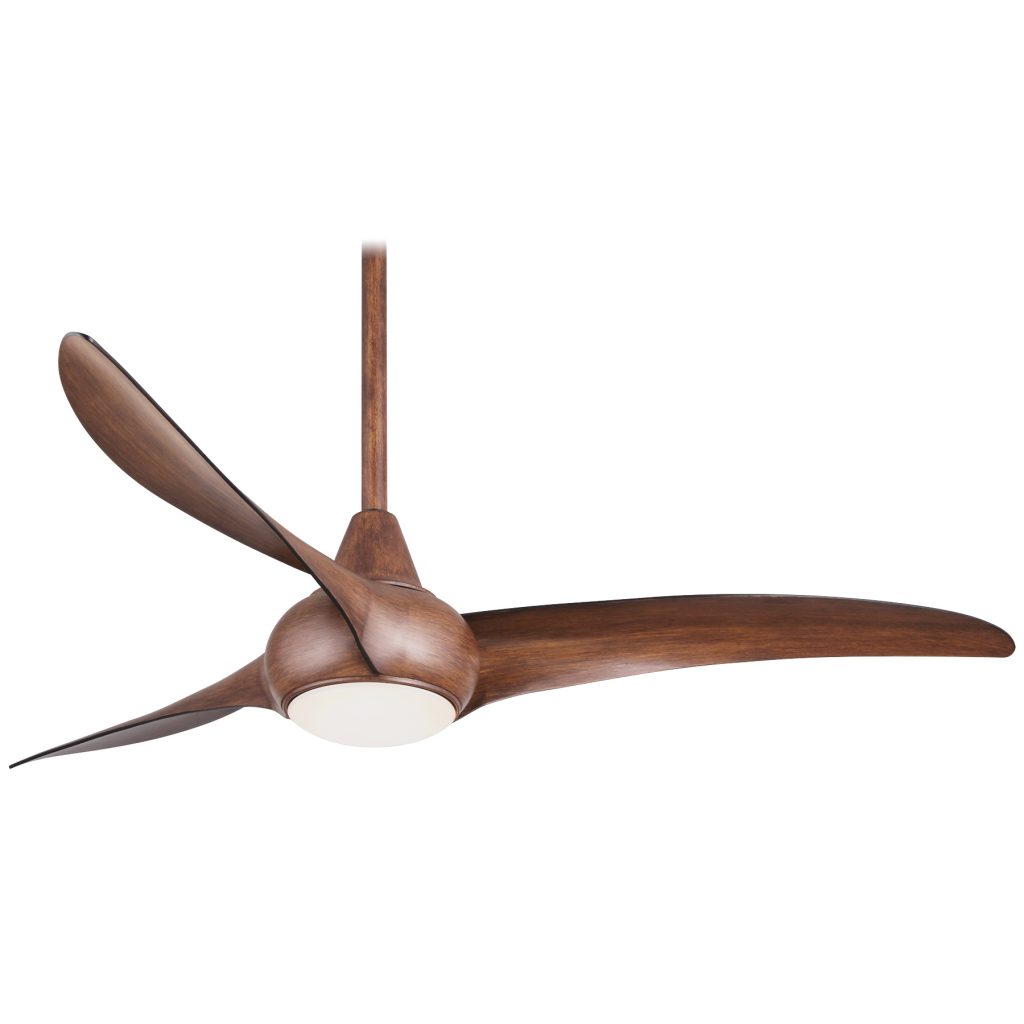 Quick Fact: This fan hangs 6 inches below the downrod – this is important because you need to ensure that the space you want to put it in has sufficient clearance.

1. There is an integrated LED light which offers additional but focused light in the room
2. There is a full remote control which gives you excellent control from anywhere in the room
3. Can easily handle a large room and make it all cool

1. It’s expensive but that’s the price we all pay for gorgeous design
2. It’s not as cooling as our top pick
3. The LED light can be a little too harsh for some people

You don’t buy the Honeywell Carnegie 50614-01 Ceiling Fan just as a fan, you buy it because it comes with an incredible amount of onboard illumination capability too.

Yes, this thing lights up brighter than a Christmas tree and you can dim the bulbs from 100-20% which means you have much greater control over brightness than on other ceiling fans. 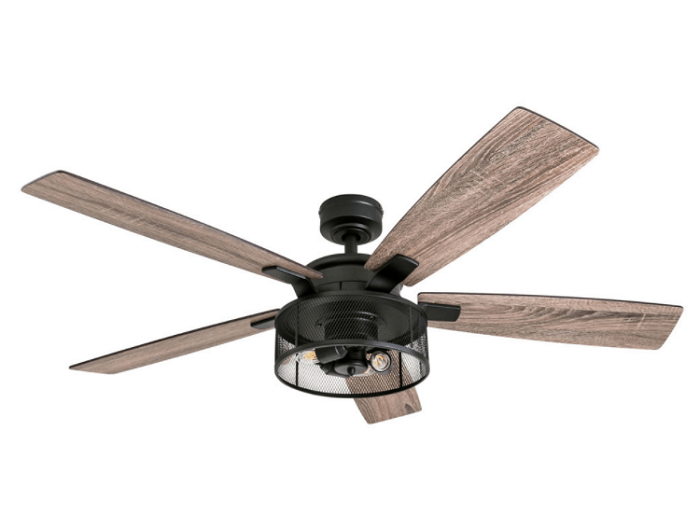 Quick Fact: This fan allows you to easily reverse the direction of spin so that if the air circulation in your home changes with the seasons, it can compensate for that.

1. The lights are amazing, if you want to brighten the place up – this is what you need
2. The lights offer a greater level of control than on a typical ceiling fan
3. Very reasonably priced given the dual functionality

1. The remote receiver fits in two ways but only works in one
2. It’s quite tricky to install – it tooks us nearly 4 hours to do it
3. You need a second person to help when attaching the fan’s blades

If you want to cool down a smaller space then you might look at the HUNTER Indoor Low Profile IV ceiling fan which is designed to work efficiently with very little clearance.

There is no downrod which means the lowest part of the fan hangs only 9 inches below the ceiling at the lowest point.

However at a 2358 CFM, this isn’t the most powerful fan on the market. 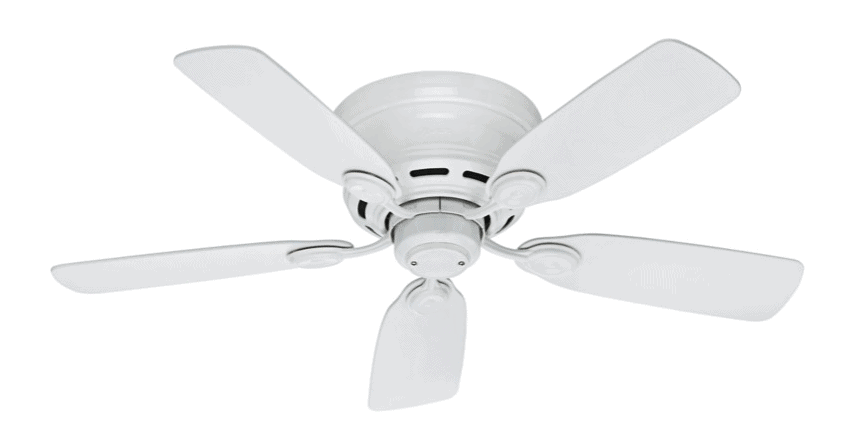 Quick Fact: You can take the blades out of this fan and reverse them to give you a choice of two different colors when installing it or because you want to give a room a fresh look.

1. If you have very little room to hang a fan in – this is for you
2. It’s a very affordable fan
3. You can choose which color you want the blades to show

1. It doesn’t cool anywhere near as well as the 3 picks on our list above it
2. The housing is a bit larger than you might expect
3. There’s no remote, though you can use a separate kit to add one

If you want a fan that produces a reliable air flow at all speeds including “low” then the Westinghouse Lighting 725300 is a great performer.

It was also one of the quieter fans in our tests though it didn’t quite measure up to our favorite HUNTER model. 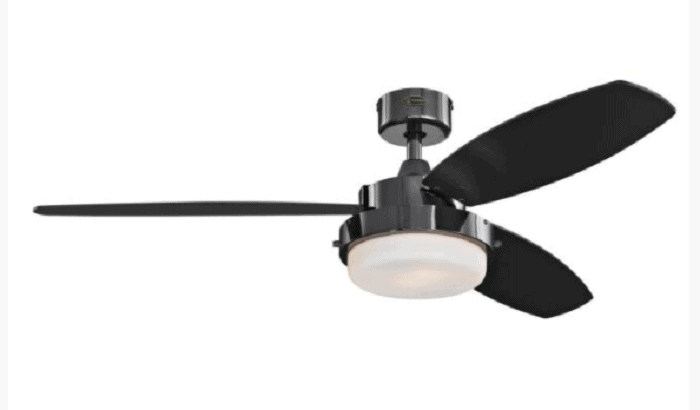 Quick Fact: If you’re not the greatest at DIY this is super easy to install – it took us less than 30 minutes to get it installed and whirring around making cool air.

1. Very easy to install and that’s a big selling point, we think
2. It produces a decent amount of air for a medium sized room or even a large one
3. Works very well on “low” setting

1. The lightbulbs in this fan are very dim
2. The instructions do include some minor, but thankfully obvious, errors
3. Can be a bit noisier than other fans

If you’re on a tight budget then you can do much worse than the Prominence Home 80029-01 Ceiling Fan.

As the name suggests it’s “low profile” and that means it’s ideal for smaller rooms and rooms without much head clearance in them. 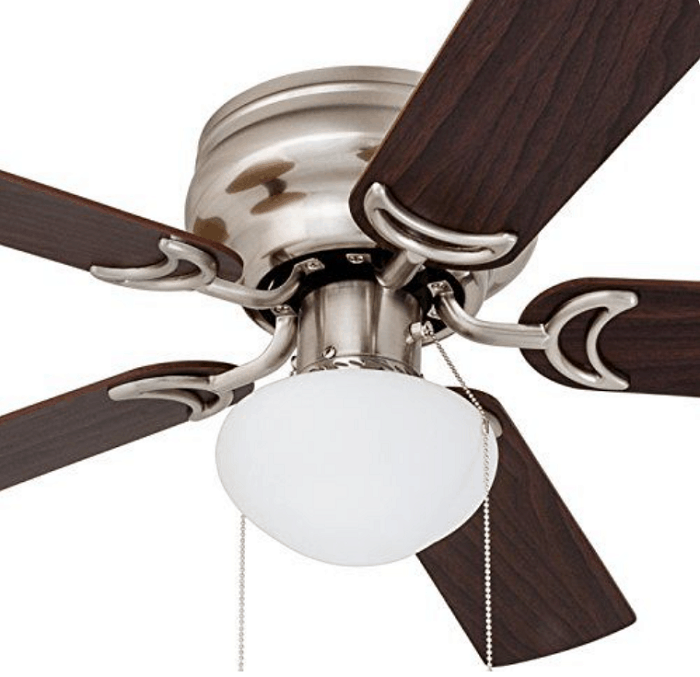 Quick Fact: This unit has a very attractive finish in a satin nickel and it’s surrounded by elegant wood blades and that makes it look more expensive than it is.

1. Won’t cool medium or larger rooms
2. The LED light they supply is very dim and can’t be swapped out for another
3. Takes more effort to install than we’d have liked

It’s hard to function properly when you’re too hot and sometimes the smaller fans just won’t get you cool. And you don’t want to run the air con constantly because that gets expensive.

When you find yourself in that situation that’s when you need one of our best ceiling fans, they’ll cool you down in an energy efficient manner and ensure you can do what you want to do, whenever you want to do it.

So, you've been thinking about buying a sectional couch. But you're a bit worried that these fairly traditional couches...

The Living Room vs Den Question

The main difference between a living room and a den is quite simple - the living room is essentially...

We love buying new stuff from a brick and mortar store. The whole experience can be satisfying. But we...

Is The Cost To Reupholster A Sofa or Couch Worth It?

Before you rush out to buy a replacement sofa or chaise lounge, you might want to consider giving the...